In this video, David and Vishesh explore the architecture behind KubeVirt and how NVIDIA is leveraging that architecture to power GPU workloads on Kubernetes. Using NVIDIA’s GPU workloads as a case of study, they provide a focused view on how host device passthrough is accomplished with KubeVirt as well as providing some performance metrics comparing KubeVirt to standalone KVM.

David introduces the talk showing what KubeVirt is and what is not:

He likes to define KubeVirt as:

KubeVirt is a Kubernetes extension that allows running traditional VM workloads natively side by side with Container workloads.

The answer is that the initial motivation for it was this idea of infrastructure convergence: 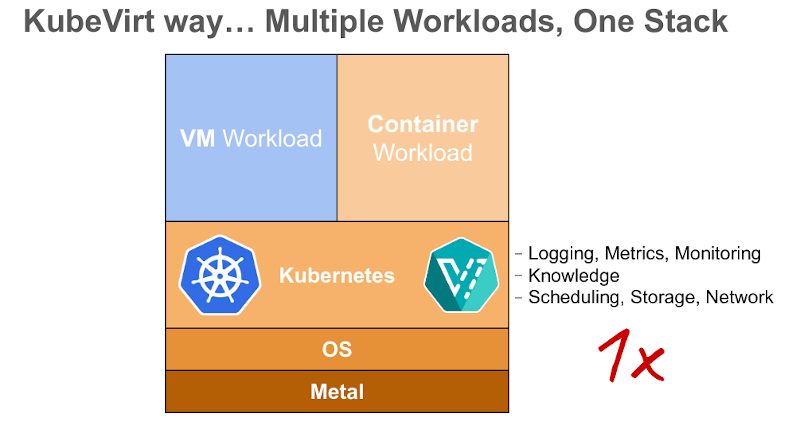 The workflow convergence means that:

An example of a VM Instance in YAML could be so simple as the following example:

The truth here is that a KubeVirt VM is a KVM+qemu process running inside a pod. It’s as simple as that.

The VM Launch flow is shown in the following diagram. Since the user posts a VM manifest to the cluster until the Kubelet spins up the VM pod. And finally the virt-handler instructs the virt-launcher how to launch the qemu.

The storage in KubeVirt is used in the same way as the pods, if there is a need to have persistent storage in a VM a PVC (Persistent Volume Claim) needs to be created.

For example, if you have a VM in your laptop, you can upload that image using the containerized-data-importer (CDI) to a PVC and then you can attach that PVC to the VM pod to get it running.

About the use of network services, the traffic routes to the KubeVirt VM in the same way it does to container workloads. Also with Multus there is the possibility to have different network interfaces per VM.

For using the Host Resources:

After the introduction of David, Vishesh takes over and talks in-depth the whys and hows of GPUs in VM. Lots of new Machine and Deep learning applications are taking advance of the GPU workloads. Nowadays the Big data is one of the main consumers of GPUs but there are some gaps, the gaming and professional graphics sector still need to run VMs and have native GPU functionalities, that is why NVIDIA decided to work with KubeVirt.

To enable the device pass-through NVIDIA has developed the KubeVirt GPU device Plugin, it is available in GitHub It’s open-source and anybody can take a look to it and download it.

Using the device plugin framework is a natural choice to provide GPU access to Kubevirt VMs, the following diagram shows the different layers involved in the GPU pass-through architecture: 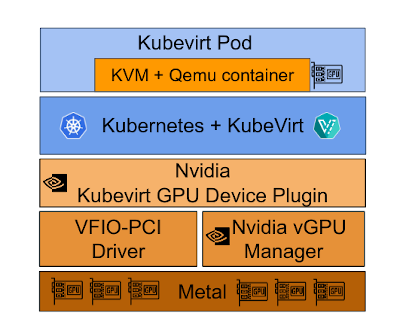 Vishesh also comments an example of a YAML code where it can be seen the Node Status containing the NVIDIA card information (5 GPUs in that node), the Virtual Machine specification containing the deviceName that points to that NVIDIA card and also the Pod Status where the user can set the limits and request for that resource as any other else in Kubernetes.

The main Device Plugin Functions are:

To understand how the GPU passthrough lifecycle works Vishesh shows the different phases involve in the process using the following diagram:

In the following diagram there are some of the Key features that NVIDIA is using with KubeVirt:

If you are interested in the details of how the lifecycle works or in why NVIDIA is highly using some of the KubeVirt features listed above, you may be interested in taking a look to the following video.

David Vossel David Vossel is a Principal Software Engineer at Red Hat. He is currently working on OpenShift’s Container Native Virtualization (CNV) and is a core contributor to the open source KubeVirt project.

Vishesh Tanksale is currently a Senior Software Engineer at NVIDIA. He is focussing on different aspects of enabling VM workload management on Kubernetes Cluster. He is specifically interested in GPU workloads on VMs. He is an active contributor to Kubevirt, a CNCF Sandbox Project.