In KubeVirt, our approach to security can be summed up by adhering to the following guidelines.

Let’s take a look at what each of these guidelines mean for us practically when it comes to KubeVirt’s design.

The Principle of Least Privilege

By limiting each component to only the exact privileges it needs to operate, we reduce the blast radius that occurs if a component is compromised.

Here’s a simple and rather obvious example. If a component needs access to a secret in a specific namespace, then we give that component read-only access to that single secret and not access to read all secrets. If that component is compromised, we’ve then limited the blast radius for what can be exploited.

For KubeVirt, the principle of least privilege can be broken into two categories.

Host Level Access: The local resources a component is permitted to access on the host it is running on.

For cluster level access the primary tools we have to grant and restrict access to cluster resources are cluster Namespaces and RBAC (Role Based Access Control). Each KubeVirt component only has access to the exact RBAC permissions within the limited set of Namespaces it requires to operate.

For example, let’s take a look at the KubeVirt control plane and runtime components highlighted in orange below. 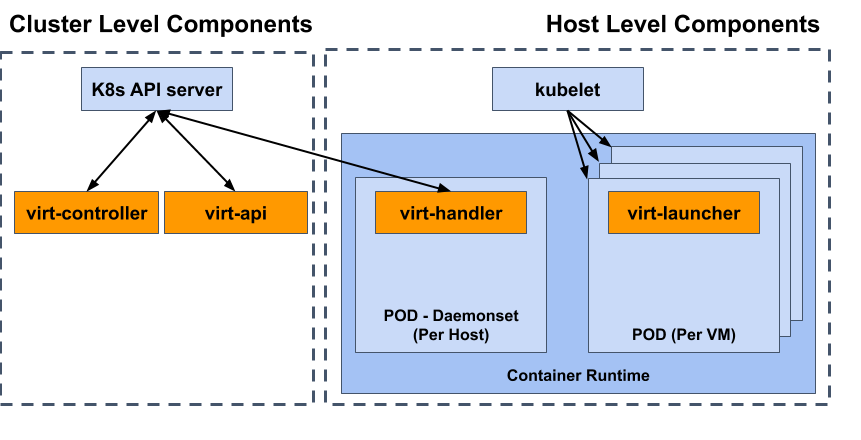 Virt-api is the component that validates our api and provides virtual machine console and VNC access. This component doesn’t need access to create Pods like virt-controller does. Instead it mostly only requires read and modify access to existing KubeVirt API objects. As a result, if virt-api is compromised the blast radius is mostly limited to KubeVirt objects.

Virt-launcher is a non-privileged component that resides in every virtual machine’s pod. This component is responsible for starting and monitoring the qemu-kvm process. Since this process lives within an “untrusted” environment that is executing third party logic, we’ve designed this component to require no cluster API access. As a result, this pod only receives the default service account for the namespace the pod resides in. If virt-launcher is compromised, cluster API access should not be impacted.

For host level access, the primary tools we have at our disposal for limiting access primarily reside within the Pod specification’s securityContext section. It’s here that we can define settings like what local user a container runs with, whether a container has access to host namespaces, and SELinux related options. Other tools for host level access involve exposing hostPath volumes for shared host directory access and DevicePlugins to pass host devices into the pod environment.

Let’s take a look at a few examples of how host access is managed for our components.

Virt-controller and virt-api are cluster level components only, and have no need for access to host resources. These components run as non-privileged and non-root within their own isolated namespaces. No special host level access is granted to these components. For OpenShift clusters, the SCC (Security Context Constraint) feature even provides the ability to restrict virt-controller’s permissions in a way that prevents it from creating pods with host access.

Virt-launcher is a host level component that is non-privileged and untrusted. However this component still needs access to host level devices (like /dev/kvm, gpus, and network devices) in order to start the virtual machine. Through the use of the Kubernetes Device Plugin feature, we can expose host devices into a pod’s environment in a controlled way that doesn’t compromise namespace isolation or require hostPath volumes.

Virt-handler is a host level component that is both privileged and trusted. This component’s responsibilities involve reaching into the virt-launcher’s pod to perform actions we don’t want the untrusted virt-launcher component to have permissions to perform itself. The primary method we have to restrict virt-handler’s access to the host is through SELinux. Since virt-handler requires maintaining some limited persistent state, hostPath volumes are also utilized to allow virt-handler to store persistent information on the host that can persist through virt-handler updates.

For KubeVirt, the separation between trusted and untrusted components comes when users can execute their own third party logic within a component’s environment. We can clearly illustrate this concept using the boundary between our two host level components, virt-launcher and virt-handler.

The virt-launcher pod is an untrusted environment. The third party code executed within this environment is the user’s kvm virtual machine. KubeVirt has no control over what is executing within this virtual machine guest, so if there is a security vulnerability that allows breaking out of the kvm hypervisor, we want to make sure the environment that’s broken into is as limited as possible. This is why the virt-launcher’s pod has such restricted cluster and host access.

The virt-handler pod, on the other hand, is a trusted environment that does not involve executing any third party code. During the virtual machine startup flow, there are privileged tasks that need to take place on the host in order to prepare the virtual machine for starting. This ranges from performing the Device Plugin logic that injects a host device into a pod’s environment, to setting up network bridges and interfaces within a pod’s environment. To accomplish this, we use the trusted virt-handler component to reach into the untrusted virt-launcher environment to perform privileged tasks.

There is a built in trust that components have for interacting with one another. For example, virt-api is allowed to establish virtual machine Console/VNC streams with virt-handler, and live migration is performed by streaming information between two virt-handler instances.

In KubeVirt we solve this issue of inter-component communication trust in the same way Kubernetes solves it. Each component receives a unique TLS certificate signed by a cluster Certificate Authority which is used to guarantee the component is who they say they are. The certificate and CA information is injected into each component using a secret passed in as a Pod volume. Whenever a component acts as a client establishing a new connection with another component, it uses its unique certificate to prove its identify. Likewise, the server accepting the clients connection also presents its certificate to the client. This mutual peer certificate authentication allows both the client and server to establish trust.

So, when virt-api attempts to establish a VNC console stream with a virt-handler component, virt-handler is configured to only allow that stream to be opened by an endpoint providing a valid virt-api certificate, and virt-api will only talk to a server that presents the expected virt-handler certificate.